Many of Buller’s most special places are best experienced on foot, and this district offers some of the best opportunities for recreational walking and hiking in the country. Immerse yourself in the wildest of seascapes, explore rainforests and canyons, and get access to impressive heritage sites. From ten minute nature and beach circuits to ten day gut-busting tramps through inland ranges, you’ll be spoiled for choice.

The Kawatiri River trail (KRT) is a walking and cycle trail that runs alongside the Buller-Kawatiri River, before linking the town with the nearby North Beach.

The Kawatiri River Trail starts under the Buller River Bridge as you drive into town. The trail heads towards town through beautiful bush alongside the river, providing users with a unique perspective on the town’s major waterway. It exits the bush at the start of the wharves, and at this point heads across the railway lines to Palmerston Street (the main shopping street). Keep heading north along Palmerston St to the fishing wharves, from where the Floating Basin Boardwalk can be seen across the harbour. Head to the end of the wharves, drop down into the carpark / picnic area, and access the boardwalk behind the old Yacht Club sheds.

Once across the floating basin there is a short circuit (Harbour Loop) which provides stunning views of the town, river and mountains and some great photography opportunities. For those wanting to go further afield, turn right off the boardwalk and head alongside the Lost Lagoon to Shingles Beach, a small sand beach on the Buller River. The trail continues from here towards the beach, the river mouth, and the meandering tracks of Kawatiri Beach Reserve. Stop for a swim before heading back to town the way you came.

The Westport Domain on Menzies Street has a series of easy gravel tracks meandering through the remnants of a lowland podocarp forest block alongside the Buller river. Some of the large trees were felled by Cyclone Ita in April 2014 but it is still a very peaceful and sheltered place to walk.

Time: 12-15 minutes
Distance: 1 km
From the recreation area off The Esplanade, close to the Buller Bridge, the Millenium Track section of the Kawatiri River Trail heads west along the riverbank towards Westport town centre through beautiful bush alongside the river, providing users with a unique perspective on the town’s waterway.

Time: 3 hours one way
Distance: 6.8 km
Accessible from Ngakawau or behind Seddonville, an old railway formation passes through an area packed with botanic and geological interest. Historic features include tunnels, sawmill and coal mine remains. A scenic highlight is a suspension bridge giving an unfolding view of the Mangatini Falls. There are shorter walking options from both ends.

Time: 10 minutes, return
Distance: 400 m
From the Granity-Millerton road, a track leads past an old dam to a section of the incline rail system that carried trucks of coal down the hill in the mining days.

Time: 20 minutes, return
Distance: 1 km
The concrete shell of a miners’ bathhouse, behind Millerton township, is the starting point for short walks to old mine entrances and building remains. A panorama from sea to mountains complements the historic attractions.

Time: 4 hours, return
Distance: 12 km
From a sign post on the highway 16 km north of Westport (or 3 km north of Waimangaroa), a farm road runs approximately 1.5 km to the start of the track. The track climbs through varied forest to the abandoned Britannia gold mine where a complete five-head quartz crushing battery stands with most of its ancillary equipment intact. (The detour via the Great Republic battery site that may be done on the return walk involves creek crossings).

Cape Foulwind is a popular place to spend time enjoying the sea air, exploring the coastline and visiting the rookery of kekeno – the New Zealand fur seal.

The headland is an important site for the seal colony as well as the sooty shearwater – a large sea-going petrel – and blue penguins.

Māori knew the Cape as Tauranga which refers to the sheltered anchorage the bay provided for voyaging canoes (waka). It was also used as a resting place as they travelled the coastal areas by foot and by sea. Abel Tasman sighted the Cape on 14 December 1642 and named it Rocky point. In 1770 it was named a “place of foul winds” by Captain Cook when his ship was beset by gales and wind. Major European settlement began in the 1860’s when the settlers established flax/harakeke and timber mills.

The walkway is situated on the Cape Foulwind headland, about 16 km south-west of Westport. Carparks are located at the southern end (Tauranga Bay) and northern end (Cape Foulwind) of this spectacular walkway which features a seal colony, a lighthouse and also provides panoramic views of mountains and coastline.

Time: 15 minutes, one way
Distance: 0.5 km
From the Tauranga Bay car park at the southern end of the walkway, a fully accessible path brings you to a view point overlooking the kekeno (NZ Fur Seal) breeding colony. Kekeno can be seen here all year round, numbers changing depending on the season. The busiest time of year is the breeding season from November to January.

Time: 1 hour 15 minutes, one way
Distance: 2.9 km
From the Seal Colony viewpoint the walkway changes to walking track standard, and continues northward along the coastal bluffs to pass by the Cape Foulwind lighthouse before reaching the northern end of the walkway and carpark. Interpretation panels along this section of track tell of sea voyages, early explorers, timber mills and quarries.

Time: 45 minutes, one way
Distance: 2 km
The walkway begins at the Lyell picnic and camping area, located 17 km from Inangahua Junction and 35 km from Murchison. A stamping battery which crushed gold-bearing quartz from the Croesus Mine is the main destination of the walkway. Other features along the way include a picturesque goldfield cemetery and interesting mounds of stones (tailings) left by alluvial miners after gold-bearing gravels had been sluiced away. Return the same way or via the historic ‘Old Dray Road’.

Time: 8 hours
Distance: Full day tramp – Challenging alpine walk
Getting there: From Seddonville, turn into Charming Creek Road, take a left into Marris-Woollet Rd, travel 10mins or so, over a wooden bridge then look for DOC signage for Glascow walk. 4WD vehicles recommended to access.

On a fine day, the Mt Glascow walk competes with any views on the planet. This marked route does not extent to Mt Glascow proper, but to a high point of 1400 metres plus on the Glascow Range. Described as a challenging alpine walk, it should only be attempted on a fine day with a perfect weather forecast, by fit, bush savvy walkers. After a 1.5 walk up to the beech clad ridge, you break out into scrub and spectacular views (this is only the halfway point). Further along there’s a creek crossing (drinking water source) and at the top of the ridge you will be treated to perfect grassy clearing and 360 degree views for that perfect photo opportunity. This is a day tramp you’ll never forget, it’s as real as it gets.

In the rugged Buller region most overnight tramping trips will lead into exposed places. So even when starting in fine conditions, prepare for the worst. Call at a Department of Conservation office or visitor centre for route information, a weather forecast – and hut tickets if required. Wear strong boots and carry all you need for warmth, first aid, shelter and sustenance. Tramp in company and let someone reliable know your intentions.  Carry a locator beacon.

Mountain bikers and trampers in search of the ultimate back-country adventure need look no further than The Old Ghost Road.

Quickly becoming known as a ‘bucket-list’ attraction, New Zealand’s longest single-track resurrects an old gold miners’ route between the ghost town of Lyell in the Buller Gorge and Seddonville on the West Coast. With expertly cut track and comfortable sleeping huts in an environment dominated by ancient rainforest, rocky mountain tops and a rugged river gorge, this is a premier multi-day backcountry experience.

While not for the faint-of-heart or inexperienced, if you match your capability and prepare appropriately, The Old Ghost Road will reward the fit and experienced adventurer with an other-worldly experience.

To broaden the audience and to make The Old Ghost Road more accessible to a wider range of appetites, a set of new exciting packages – Old Ghost Adventures – has been created. Old Ghost Adventures include such options as helicopter assists to the astounding alpine tops, helicopter luggage assists, rustic luxury accommodation to start or end your journey, end-to-end transport shuttles, heli-biking or heli-hiking and even rafting the Mokihinui Gorge as the final leg of your journey. For more information please visit the official website. 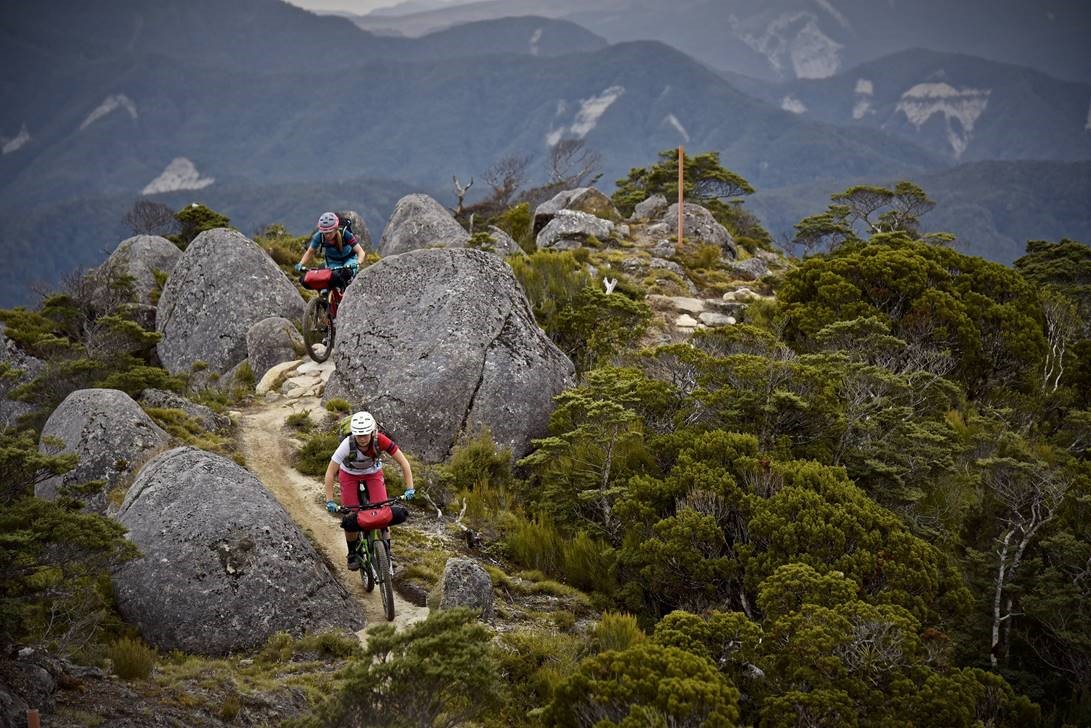 Time: 5 hours to hut
Distance: 10.5 km
Alpine surroundings and spectacular views are the rewards for the five hour climb to the Bucklands Peak Hut behind Westport. The way to the hut is via a marked route, suitable only for experienced trampers. A topographic map, compass, good tramping gear and a gas stove are essential. The hut does not have a fire.
The track is sign posted from the highway, 6 km from Westport in the direction of Inangahua Junction. A farm road leads to a car park at a locked gate where the walking begins – an hour across Caroline Terrace, then four hours up to the six-bunk hut at 1175 metres. The Paparoa tops are a further 2 hours up at 1325 metres.

Denniston is steeped in coal mining history. You can follow the same tracks that residents and miners did over a hundred years ago and explore the many relics still there. Interpretation panels bring to life the history of Denniston.

Time: 3 hours up, 2 hours 30 minutes down
Distance: 4.2 km
Signposted from Conns Creek Road behind Waimangaroa at the bottom end, and Denniston township at the top, a bridle track makes a pleasant if steep bush walk. A short branch track near the top leads to the incline that carried coal down (and occasional cool-nerved passengers up). A lower branch to the Waimangaroa-Denniston road offers a shorter walking option. Aside from the incline, which was used for transportation of coal, the bridle path, completed in 1884, was the only means of access to Denniston. Travel along this route was either by horse, or on foot.

Time: 40 minutes loop
Distance: 1.1 km
Starting at the Brakehead, this 40 minute walk leads past the ‘The Camp’ – Denniston’s first settlement, and on to the Banbury Arch viewpoint, returning via the historic mine workshop site. Many relics from Denniston’s past can be seen on this walk.

Time: 40 minutes, loop
Distance: 1.3 km
Starting at the ‘school site’ by the Friends of the Hill Museum, this 40 minute walk takes you through the old streets of Denniston township. Passing by the bowling green and beside old residential sections, brick chimneys are still evident in various stages of decay. The walk crosses the main highway and runs alongside the old Denniston-Burnetts Face roperoad, before emerging again at the ‘school site’.

Time: 1 hour, return
Distance: 2 km
A good shingle road behind Denniston (still used by the coal trucks) leads to the start of the walkway. This follows part of the roperoad that carried coal from the mines to the top of Denniston Incline. Relics include tunnels, foundations, a haulage winch and the country’s best remaining example of a mine fanhouse.

Time: 4 hours, return
Distance: 5.2 km
This tramp to Mt William begins at Coalbrookdale and follows a marked route to the 1062 metre summit, where rewarding views of the Denniston plateau, and coastline beyond, can be seen. As the weather on Denniston can change unexpectedly, make sure you take appropriate warm clothing, a waterproof jacket, food and water for this trip.